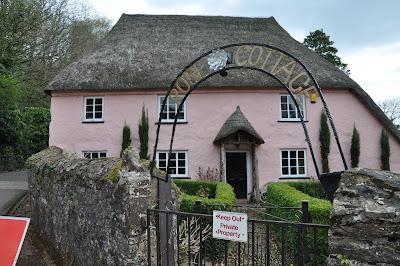 On Saturday we headed for Cockington Village, a short distance from Torquay in Devon.
It is a beautiful setting - it has a manor house, parkland and woodland.
We had been here many years before when Our Daughter was very little - there is usually a horse and cart ride that you can take around the Village but only from Easter onwards!
It was a lovely day though, the sun was shining and I wore sunglasses probably for the first time this year!
The "Rose Cottage" above is normally open as a Cafe / Restaurant. It wasn't "Open" but we weren't daunted as we headed to another Cafe across the road - see below. 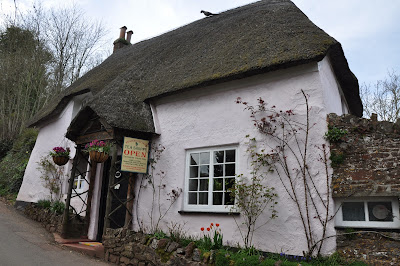 We had a light lunch of sandwiches and bacon baps in the lovely little courtyard of this Cafe and Our Daughter declared the banana milkshake to be "One of the best I've ever had!" The staff were very helpful and friendly. It makes such a difference and makes your day out more enjoyable! 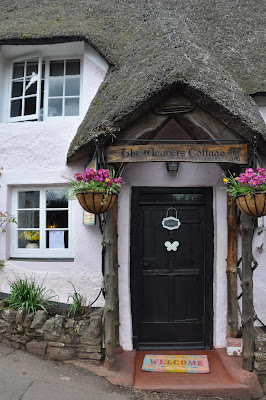 There are many thatched roofs here! 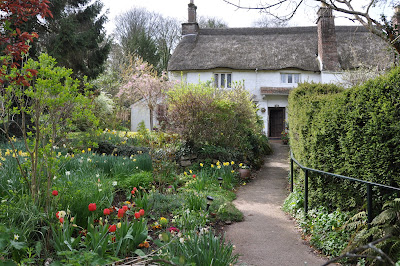 The cottages are wonderful but the owners must get annoyed with all the tourists. Mind you they must have known what they were letting themselves in for when they purchased their properties. A small price to pay for living in such a historic location. 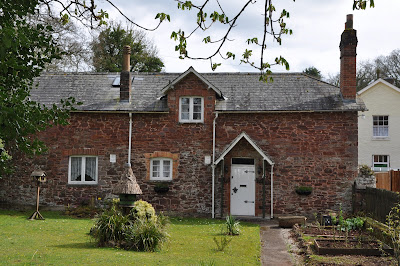 There are many beautiful cottages here. 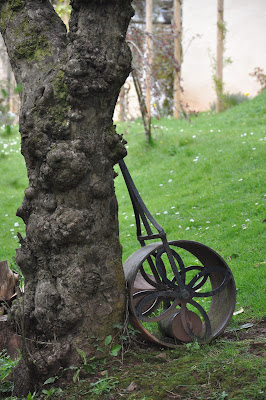 I liked this roller leaning against the tree. 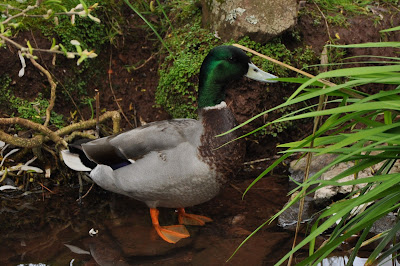 This duck was very happy in its little pond! 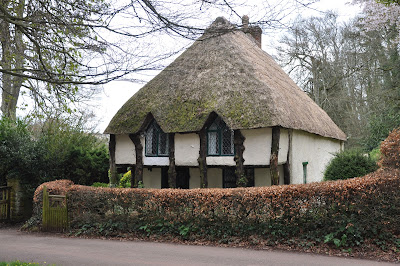 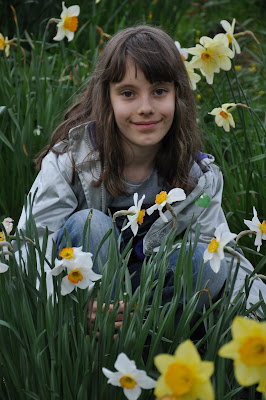 The parkland was full of daffodils. 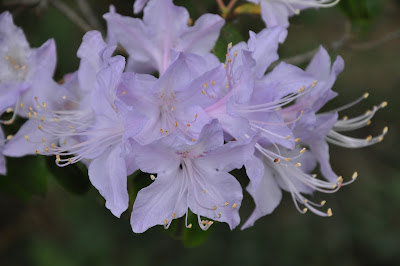 Is this a rhodedendron - I just loved that light lilac colour. It was a big bush and it was covered in these flowers - striking from a distance and even better close up! 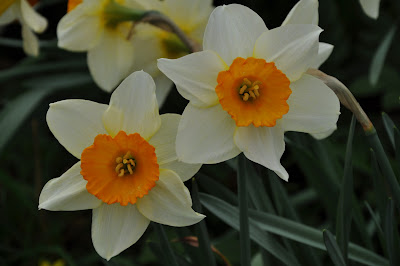 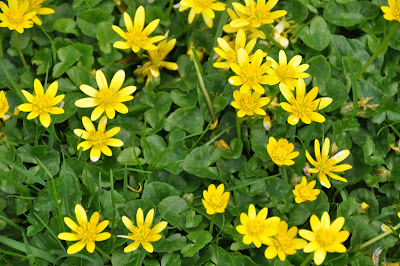 Some areas of the parkland / woodland were covered with this little yellow flower - it looks a bit like buttercups. Is it celandine?
Torquay of course is famous for its link to "Fawlty Towers".  The story is that John Cleese and the rest of the Monty Python team were filming nearby in Torbay and were checked into the Hotel Gleneagles. The owner, Donald Sinclair, was eccentric and berated Terry Gilliam for not using his knife and fork properly and threw Eric Idle's bag over a wall believing it  to contain a bomb! While many of the Monty Python team abandoned the hotel to go to another, John Cleese stayed on and "took notes" and invited his then wife, Connie Booth, to join him. This turned out to be the beginning of  "Fawlty Towers." Who could ever forget John Cleese as Basil Fawlty and Connie Booth as Polly.
I remember watching these half hour shows as I was growing up - I would be doubled over laughing with tears streaming down my face.
The one show that I most remember is when there is a fire drill practice - only it turns out that there is a real fire. Basil keeps pushing poor Manuel, the waiter, back into the burning kitchen telling the guests and Manuel that it is only a practice!
Another memorable show is when the health inspectors arrive just at a time when Manuel has befriended a rat!
I do believe that the Other Half bought me a boxed set of Fawlty Towers many years ago. I will go in search of that box which must be in a cupboard somewhere!
Until next time.
June.
Posted by June at 10:52

Please do leave a comment. I love to hear from you!

June
Happily married with a twelve year old daughter. We live in Hampshire but spend a lot of time in the West Country. We have five cats, two dogs and a rabbit.